The UT Austin School of Nursing will host a memorial lecture in honor of Dean Emerita Sands on Tuesday, Oct. 15, 10–11:30 a.m. Bernadette Melnyk, Dean of The Ohio State University College of Nursing, will present “Evidence-based Practice Plus Clinician Well-being to Reach the Quadruple Aim in Healthcare: Key tactics for success.” For more information or to register, please visit the School of Nursing’s Dean Emerita Dolores Sands Memorial Lecture page. 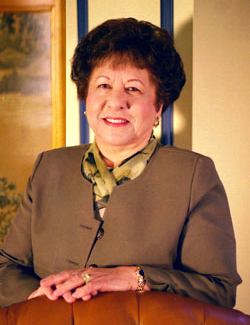 Dolores Sands, a long-time leader in nursing science and education and former dean of the UT Austin School of Nursing, passed away in October 2018 in The Woodlands, Texas. She began her career in nursing research as a professor at Arizona State University. There she served as director of the Graduate Program in Nursing Administration, acting dean, assistant dean for research and resources, and assistant dean for the baccalaureate program.

She was recruited to UT Austin to lead nursing research, where she conducted major research initiatives funded by the National Institutes of Health and was honored with numerous awards recognizing her significant contributions to advancing nursing education and practice. Dean Sands served as professor and director of the Center for Health Care Research and Evaluation, which later became the Cain Center for Nursing Research in recognition of a $5 million gift for nursing research from Mary and Gordon Cain.

In 1989 she was named dean of the School of Nursing. During her 20 years as dean, she garnered over $16 million in permanent endowments for the school, including the Cain endowment that also endowed a $1 million Chair in her name. She was named a fellow of the American Academy of Nursing. Upon her retirement she was named dean emerita in honor of her distinguished career.

“The impact of Dean Sand’s leadership is immeasurable and ranges from her efforts to build the research productivity of the school, strengthening the PhD program and leading the implementation of our first nurse practitioner programs,” said Alexa Stuifbergen, dean of the UT Austin School of Nursing.