The Tradition of Leadership Begins

The following information is courtesy of UT Austin Alumna Dr. Barbra Mann Wall (BSN 1971), who has written extensively about nursing history and recently co-authored Through the Eyes of Nursing: Educational Reform at The University of Texas School of Nursing, 1890–1989 with Dean Emeritus Billye Brown.

With the financial support of the Texas Graduate Nursing Association, graduate courses in nursing were first offered in 1930 in the Department of Physical and Health Education at the Main University. In 1940, a complete curriculum was established leading to the degree of Bachelor of Science in Nursing Education. A program leading to the Master of Science in Nursing with a major in nursing administration was offered in 1952. Like most nursing schools in the country, enrollments in graduate programs in Texas were small.

We Find a Home on the UT Austin Campus

In fall 1960, nursing courses were offered on the Austin campus for the first time when faculty members Billye Brown and Mitzi Dreher transferred from UTMB at Galveston. Over the years, many organizational changes occurred, and in 1972, the School became part of The University of Texas System School of Nursing (UTSSN), which had six component units: The University of Texas Schools of Nursing at Austin, El Paso, Fort Worth, Galveston, Houston, and San Antonio. 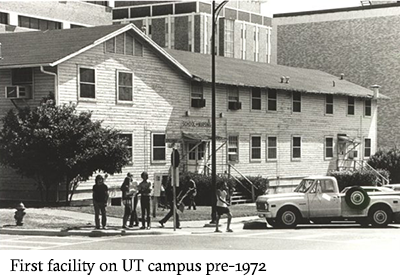 But changes continued, and on March 26, 1976, the Board of Regents of The University of Texas System voted to reorganize the schools of nursing and placed each under the administration of the president of the health science center or academic institution nearest it. Thus, on September 1, 1976, the School of Nursing at Austin officially became part of The University of Texas at Austin.

“As political and professional changes have occurred over the past 60 years, faculty, students, and staff at UT Austin School of Nursing have played a critical role in coordinating programs, working with the community, educating nurses, and supplying faculty across the state of Texas and the United States. Over this time, nursing faculty have become leading scholars in nursing research as they have gained new professional identities and equality in academia.”

The Evolution of Nursing Education

Major changes in the U.S. health care system have called for major changes in the education of nurses. Nursing education at all levels has had to provide a better understanding of and experience in care management, quality improvement, systems level change management, and the reconceptualized roles of nurses in an evolving health care system. As the nursing profession has developed, nursing education at UT Austin has adapted to meet the need.

The PhD program in Nursing began in 1974 making UT Austin the 7th school in the nation to offer the degree. In 1989, we became the second school in the nation to offer an innovative master’s entry to nursing for students who already have at least a bachelor’s degree in another discipline. This Alternate Entry Master of Science in Nursing program now has more than 1,000 alumni and remains the only master’s entry program in the state of Texas.

Several major curricula changes have been made over the years to the Bachelor of Science in Nursing, including new requirements for coursework in Spanish for Health Care Professionals and Global Health. The Undergraduate Honors Program, designed to enhance the educational experience of high-achieving undergraduate nursing majors by focusing on the development of scholarship, began in fall 2008. Honors students work with faculty mentors on research, take special honors sections of selected courses, complete an honors thesis, and present their work at a conference or poster session. A recent survey of the more than 100 Honors graduates reported that former students were able to use the evidence-based practice skills they had learned in their subsequent employment. 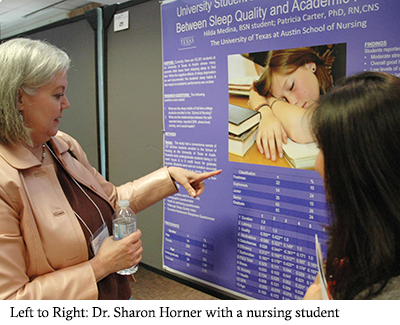 In January 2016, the School was the first in Central Texas to initiate the Doctor of Nursing Practice (DNP), a program offered in a hybrid format with a combination of on-campus and online learning experiences. The fourth cohort, with students from across the state, graduated in May 2020.

The School received a three-year, greater than $1 million grant from the Health Resources and Services Administration in 2013 to fund “Enhancing the Advanced Nursing Education of Clinical Nurse Specialists through Integration of Care for Patients with Multiple Chronic Conditions Using Interprofessional Education.” This program augmented the education of master’s-level advanced practice students in the Adult-Gerontology Clinical Nurse Specialist program and provided an important foundation for the Center for Health Interprofessional Practice and Education (IPE), a collaboration with UT Austin’s College of Pharmacy, Dell Medical School, and the Steve Hicks School of Social Work. In 2018, the School received the American Association of Colleges of Nursing Innovations in Professional Nursing Education Award in recognition of innovations in interprofessional education. 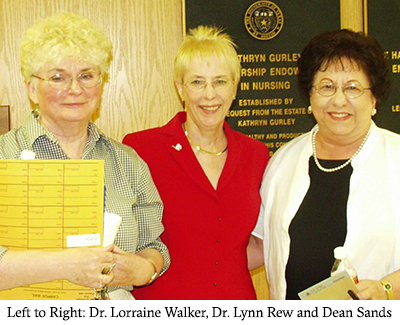 Research achievements have grown significantly over time, consistent with the School’s location on the campus of a leading public research university. In 1977, Dean Billye Brown hired noted researcher Dr. Mabel Wandelt. Through a contract to UT Austin School of Nursing and its Center for Health Care Research and Evaluation, Dr. Wandelt and colleagues guided the collection and analysis of data for a national study that culminated in the Magnet hospitals report published in 1983. This publication formed the basis of the highly successful Magnet Recognition Program that exists today. 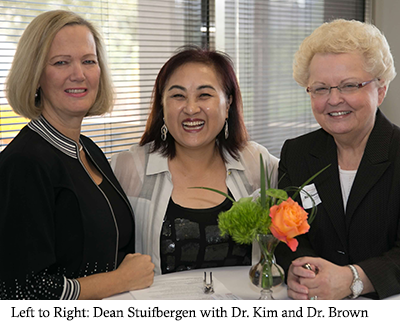 The CHPR and supplements were funded for 10 years by the NINR for more than $4 million and subsequently endowed by a $3 million gift from the Austin-based St. David’s Foundation. The CHPR, now known as the St. David’s CHPR, has supported pilot work for over 20 years for more than 76 nursing and interdisciplinary investigators, 55 percent of which have obtained subsequent extramural funding. The NIH also awarded the School $1.5 million in 2002 for a P20 Exploratory Research Center Grant, “The Southwest Center: Partners in Health Disparity Research” (Rew, PI).

At the beginning of the new century, the School received its largest award to date at that time: a $5 million gift from Gordon and Mary Cain to endow the Dolores V. Sands Chair in Nursing Research and the Gordon and Mary Hancock Cain Excellence Fund for Nursing Research. Faculty continued to excel in research, and in 2003 the School was ranked No. 7 in NIH funding to Schools of Nursing. More recently, the School received a new P30 Center of Excellence Grant from the NIH to establish the Center for Health Equity Research (HER) in 2014 and in 2020 a new NIH T32 Institutional National Research Service Award to support training for doctoral students in precision health (Kim, PI).

In 1991 the School’s Women’s Wellness Clinic, under the leadership of faculty members Sue Grobe and Mary Lou Adams, began offering breast and cervical cancer screening services for uninsured and underinsured women in Travis County with financial support from the Texas Department of Health, the Austin affiliate of Susan G. Komen for the Cure, and the Veritas Foundation. Today, the Family Wellness Clinic offers service to all ages in Austin and Central Texas.

In 1995, the school district nurse for Del Valle ISD (DVISD), the only registered nurse working in the district at that time, approached the School of Nursing for assistance with the complex health problems of the children in that area. With initial funding from the Texas Department of Health, the Children’s Wellness Clinic opened in April 1996 as a primary health care site for children ages 0-21 who reside in DVISD. After 24 years of continuous service, the CWC last year served 2,100 patients and is responsible for the DVISD’s 99 percent vaccination rate. Both clinics serve as sites for student clinical placements and were critically important in helping students acquire needed clinical hours in spring 2020.

From its beginnings as part of the Galveston campus to its reorganization as a UT System School to its current standing as a valued component of the leading academic institution in Texas and one of the top schools of nursing in the nation, the UT Austin School of Nursing is the product of the outstanding leadership of its two former deans and current dean. 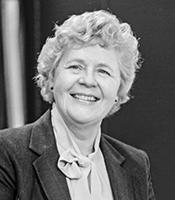 Billye J. Brown, EdD, RN, FAAN, was appointed associate dean of the UT System School of Nursing in Austin in 1967. She then became the first dean of the UT Austin School of Nursing and served from 1972 until her retirement in 1989. Dean Brown oversaw the growth of the undergraduate and graduate programs, a budding nursing research program, and a continuing education program. She also served as president of Sigma Theta Tau International (1989–1991), was assistant editor of the Journal of Professional Nursing, and served as president of the American Association of Colleges of Nursing and the Texas Nurse’s Association. 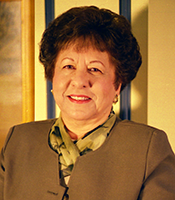 Dolores V. Sands, PhD, RN, FAAN, was appointed dean in 1989 following the retirement of Dean Brown and served until her own retirement in 2009. As dean, she provided the organizational infrastructure that maximized faculty development in teaching, research, and service to position the School of Nursing as one of the top nursing programs in research funding from the NIH. Dean Sands served on the NIH National Advisory Council for Nursing Research from 2001 to 2005. During her 20 years as dean, she garnered over $16 million in permanent endowments for the school, including the $5 million Cain endowment that also endowed a $1 million Chair in her name. 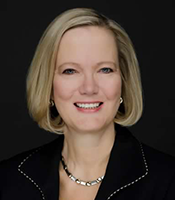 Alexa K. Stuifbergen, PhD, RN, FAAN, became interim dean in 2009 and the School’s third dean in 2010. She is the first UT Austin alumni and first native Texan to serve as dean. She served as associate dean for research for 10 years prior to becoming dean and later as a member of the National Advisory Council on Nursing Research at the NIH (2014–2019). Dean Stuifbergen was inducted in 2017 to the Sigma Theta Tau International Researcher Hall of Fame and holds the Laura Lee Blanton Chair in Nursing. During her term, Dean Stuifbergen has led development efforts that to date have generated well over $37 million, including a $3 million gift from St. David’s Foundation to endow the Center for Health Promotion and Disease Prevention in Underserved Populations.

The School moved to its current location at 1710 Red River in 1973. The five-story Nursing School building houses administrative, faculty, staff, and research offices, as well as large and small classrooms and seminar and conference rooms. In 2014 the School engaged the services of Jacobs Consulting to evaluate current spaces and building configurations and to design an upgraded, updated learning facility. Today, after 40,517 square feet of improvements have been completed, the School comprises 112,728 square feet.

Renovations were completed in the nursing skills and simulation labs in 2015, the interior courtyard in 2016, and all ground floor classrooms, including creating the Nursing Commons, in 2017. In 2019, 12,000 square feet of space on the third and fifth floors provided a new student lounge and the Learning Enhancement and Academic Progress Center. That same year saw the creation of the Myrtle E. and Earl E. Walker Terrace, on the west side of the building overlooking Waller Creek and Dell Medical School. In fall 2020, the school opened the Myrtle E. and Earl E. Walker Lobby.

Looking to the Future

The School of Nursing’s history of successfully adapting to changing and varied health care needs has been a fascinating, if circuitous, journey paralleling the growth of nursing science and leadership in the 20th and now well into the 21st century. Current health care crises, including the pandemic, inequitable access to care, and continued nursing shortages, are only a few of the challenges Nursing faces. But ultimately, we can — and must — learn from our history the importance of pushing the boundaries of research, education, and service so that the future continues to be an opportunity to improve the health of our communities and nation and, indeed, the world.