What Florence Nightingale Can Teach Us About Nursing Today

On May 12, we celebrated the 201st anniversary of Florence Nightingale’s birth. She continues to be recognized as the nurse leader who revolutionized nursing by collecting and using data, introducing hygiene practices that reduced mortality rates and providing reports to governmental leaders about changes required to improve military health care among British troops as well as civilian public health. Florence didn’t dream of becoming a nurse in her earlier years, but at 16 she had a religious awakening and became convinced that her destiny was “to do God’s work.” That is when she decided to become a nurse. Her parents were opposed to her decision because nursing was regarded as disreputable and suitable only for lower-class women.

Florence, however, was not deterred and attended the prestigious Kaiserswerth Nursing School in Germany. Early in her nursing career she served as superintendent of a London hospital focused on caring for governesses, and in 1853, she cared for prostitutes during a cholera epidemic.

Florence is most widely known for her role during the Crimean War between Great Britain and Russia. She was sent to the Barrack Hospital at Scutari, Turkey, where she cared for thousands of sick and wounded British troops. She had 38 nurses to help care for soldiers with wide-ranging maladies, such as frostbite, gangrene, dysentery and cholera. During her first winter, 4,077 soldiers died; ten times more soldiers died from disease than from battle wounds. In 1855, a sanitary commission was sent to Scutari. They flushed out sewers, cleaned out overflowing latrines and cesspits, and removed a dead horse that was contaminating the drinking water. With such changes, the mortality rate dropped from 42.7 percent to 2.2 percent over a few months. 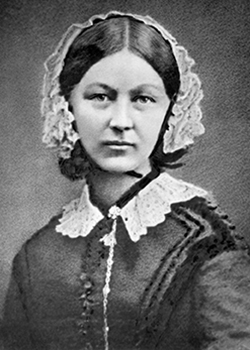 Over the course of her life, Florence continued to gather data about various aspects of medical care. She sent surveys to hospital administrators, collected and analyzed health care data, wrote numerous reports, and established investigative commissions. Her analyses provided findings about the proportion of recoveries and deaths from a variety of diseases, average disease trajectories and recovery times according to patients’ ages and gender. She also investigated the high rates of communicable diseases among hospital workers. Florence came to believe that using statistics to understand how the world worked was to understand the mind of God. She became the first woman to be made a Fellow in the Royal Statistical Society.

Having confined herself to a hotel room while recovering from Crimean fever, Florence published her Notes on Hospitals and Notes on Nursing in 1859. Despite her personal brush with this fever and near-death symptoms, Florence initiated dramatic changes not only in military hospitals but in the formation of her own Nightingale School of Nursing, which opened to its first students in 1860. Although too ill to teach in the school, the education of nurses and hospital administrators became important aspects of her legacy.

Florence was an unwavering champion of disease prevention, and an outspoken advocate for mental health, education (including health education) and public health. Her concern for “society’s disadvantaged” led to her criticism of Poor Laws and her insistence that Parliament improve workhouses and shelters for the poor, where the sick and infirm were placed in separate wards with nurses to care for them. She talked and wrote about housing access, clean air and water, and improved sanitation methods. Essentially, she put forth the notion that health care is a human right.

Florence possessed leadership qualities that were not expected of women during her time; she was clear and decisive, often challenging the status quo. She did not embrace the Victorian conventions that marriage and domestic life were the only vocations for women. Rather, she was well versed in the natural and social sciences, applying statistical methods to health care data to demonstrate outcomes of interventions. She also was a pragmatic and collaborative leader. She worked with a diverse range of people to accomplish her goals: physicians, engineers, military officers and policymakers. She is known for having a clear vision regarding the outcomes she wanted to achieve, but she deferred to the technical or strategic expertise of her colleagues. Florence was plain spoken and at times could be judged as harsh and abrasive, but she was focused on change, not necessarily making everyone happy.

All of the work done by Florence and her leadership can be put into the context of the current COVID-19 pandemic. She advocated for six environmental themes: use of evidence, ventilation, personal and household cleanliness, patient observation, proper management of the environment, and advocacy. She used statistics about characteristics of nurses to document the need for professional nurses and advocated for the rights of patients and the public health of the community by stressing the cleanliness of individuals and their dwellings. She taught nurses the skills and habit of observation, including what and how to observe and to report facts rather than opinions. 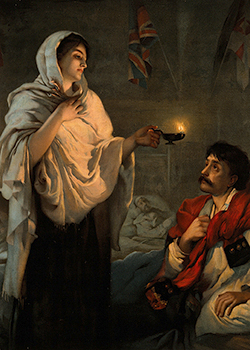 The importance of a sufficient number of prepared nurses is apparent today during the pandemic. Florence’s focus on cleanliness supports the present charge to wash hands with soap and water as well as to maintain proper sanitation to avoid contracting COVID-19. Nurses’ observations of complex patient symptoms as well as their pain and exhaustion apply currently to the victims of the coronavirus along with using the best scientific evidence to manage care. And finally, nursing management of the health care and public health environment is central to quality outcomes for patients, health care workers, and organizations.

Among the contributions of her classic book, Notes on Nursing: What It Is and What It Is Not, was a deep understanding, albeit within a Victorian science perspective, of what constituted and contributed to the patient’s health and well-being. In this regard, Florence recognized the importance of what today is called psychosocial well-being. In her words, “Apprehension, uncertainty, waiting, expectation, fear of surprise do a patient more harm than any exertion.” Her awareness of the importance of the psychosocial domain is reflected in numerous nursing research studies and interventions to mitigate the harmful effects of stress.

Once described as a “saint” by Queen Victoria, Florence is remembered as a visionary who championed the use of facts over opinions in the fight against communicable disease and death. Moreover, she was instrumental in making nursing a respectable profession as she advocated for patient-centered care and the application of evidence.

Florence showed us what service looks like. It is not always an easy path to follow, and at times it may push us beyond boundaries that we have previously known. Nurses and other health care workers engaged in the COVID-19 pandemic are being rightly celebrated today as heroes. They follow in the footsteps of other nurse heroes who served in numerous wars in the past two centuries and the nursing hero we celebrate this year, Florence Nightingale.