In east Austin live a largely unknown refugee population who fled their native Burma (also referred to as Myanmar) several years ago, forced to leave because of persecution by the ruling parties in their homeland. They are Matu, a tribe of the ethnic Chin group, and were accepted into the United States after genocidal attacks by the Burmese military junta. Approximately 50,000 members of the Chin group now live in the U.S., and 35 to 50 Matu families have found refuge in the city of Austin.

Settling together near Parker Lane United Methodist Church, the group caught the attention of Pastor Sharon Stewart, who welcomed them into her congregation. Working with their English-speaking community pastor Mam Tee, she quickly saw a need to help them gain access to health care.

Cue the UT Austin School of Nursing’s public health instructors who were looking for a clinical site for the second semester seniors enrolled in their courses. Serendipitously, one of those, Karen Johnson, PhD, RN and associate professor at the school, is also a member of the Parker Lane UMC. Johnson also teaches the theory portion of the public health nursing course and was eager to ensure that the students had adequate opportunities to complete the practicum section of the course.

“When I approached Pastor Sharon about having our public health students meet with the Matu families, she immediately saw the value of such a project and agreed,” Johnson said. “She expressed her concern about a gap in the community’s knowledge base regarding their health issues, which is ultimately what we are trying to address through these teachings.”

Beginning the third week of the spring 2018 semester, Jamie Rock, MSN, RN and assistant instructor, took five of her students to the church and met with several Matu women while their pre-school-aged children played around them. The students had already learned that most, if not all, of the women had experienced a miscarriage since arriving in the U.S., and some had more than one. 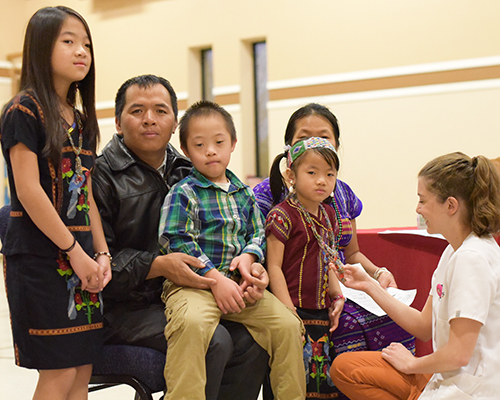 Through panel interviews translated by Community Pastor Mam Tee, the students learned what concerned the women the most, such as child development, safety issues, and colds and flu, and used this information to develop content for a weekly clinic.

“They don’t have the means to get to a local clinic or the language to explain what they needed if they did manage to get there,” said Helena Hwang, one of the students. “Without the interpreter, it would have been impossible to communicate. Despite the language barrier, I was very surprised at how much they trusted us and how open and receptive they were.”

As they covered the common cold, allergies, pregnancy and menstrual cycles, the students were able to build a rapport with the refugee women. It was soon clear, however, that Pastor Mam Tee didn’t have the needed health care language, so Pastor Sharon applied for and received a grant to pay for a female translator.

This year’s flu season was a busy one. Through the new translator, the women heard about the importance of getting a flu shot and how it is administered. Only 10 women attended that particular session, but 35 men, women, and children showed up the next week to get immunized, all but four from the Matu community. For a majority of those, this was their first time to receive the flu vaccine.

“The most surprising aspect of working with these women was how receptive and excited they were to learn public health information from us,” said Isobel David, another student. “I was nervous the first time because I didn’t think they would want to sit through a lecture on health information, but every single one of them sat through it diligently taking notes!”

“The community overwhelmingly stated through the interpreter during a recent clinic session that we have succeeded in meeting their need by providing health care information in a safe and familiar surrounding where they felt comfortable asking questions,” said Rock, who is also a doctoral student at the School of Nursing.

Kristy Le, another student, is from an immigrant family and, after hearing about the Matu’s experiences, came to better understand the experiences her family probably went through.

“I understood what it must have been like to arrive in a foreign country without being able to communicate, let alone having any knowledge of how to navigate the health care system,” she said. “The fear associated with these barriers deepens my appreciation, respect and empathy for refugees.”

Other students agreed. “I can’t begin to imagine the hardships they have to go through in their everyday lives. But they still manage to be cheerful, courteous and thankful for even the smallest things,” Belinda Soto said.

“The students have run with this project,” Rock said. “In addition to the flu clinic, they covered general health, women's health, and child development topics to a rapt audience. They have been so passionate about it and have put so much time, energy and resources into this community.”

“Parker Lane UMC is fostering and building relationships with local residents and attempting to address needs as they arise within the community,” Pastor Sharon said. “The nursing students have been wonderful in responding to questions and providing practical and skillful presentations relative to women’s and children’s health needs. The patience and genuine caring shown by the students eases fears and builds trust among the participants and affords learning and benefits for all involved.”

Which is good news, because, according to the public health students and faculty, they plan to go back.