Kelsey Mumford, a senior nursing student, finished in second place in the 2018 Texas Student Research Showdown. The competition is organized by the Office of Undergraduate Research at The University of Texas at Austin and gives students a chance to show off their science story chops. 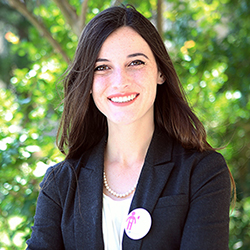 Students competed with two-minute videos that translate their scholarship in ways anyone can understand. A panel of faculty judges scored the videos on how well they captured an audience’s attention, how well they told a narrative about the work, whether the methods suggested rigorous scholarly or creative activity and how well the student targeted a general, rather than expert, audience. Of the 27 submissions, four undergraduate researchers were selected as winners. The judges’ top videos received awards of $2,500, $1,000, and $500, generously funded by a gift from Kimberly and Scott Martin.