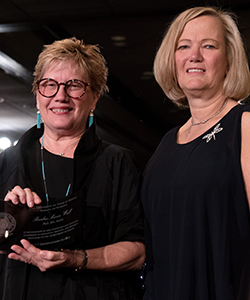 Dr. Wall is an internationally recognized nurse historian whose research demonstrates nurses’ strong influences on the development of hospitals and nursing schools. She holds the Thomas A. Saunders III Professorship in Nursing at the University of Virginia School of Nursing. She also directs the Eleanor Crowder Bjoring Center for Nursing Historical Inquiry.

Her second book, American Catholic Hospitals: A Century of Changing Markets and Missions, analyzed the heretofore invisible role of Catholic sister nurses as leaders of the largest not-for-profit health care system in the United States and the tensions that developed as religious institutions attempted to directly shape health policies in a diverse milieu.

Her book Into Africa: A Transnational History of Catholic Missions and Social Change explores the intersection of religion, medicine, gender, race, and politics in sub-Saharan Africa after World War II. This book won the Lavinia Dock Award in 2016 from the American Association for the History of Nursing and the American Journal of Nursing award for Best Book in History and Policy.

Her most recent book Through the Eyes of Nursing: Educational Reform at The University of Texas School of Nursing, 1890–1989, co-written with Dean Emerita Billye Brown, was published this year. It uses UT Austin as a case study to examine the academic evolution of nursing education.

Dr. Wall also is co-editor, with Dr. Arlene Keeling, of two books on the history of nursing in disasters: Nurses on the Front Lines: When Disasters Strike, 1878-2010 (2010); and Nurses and Disasters: Global, Historical Cases (2015); and she is the Editor-in-Chief of Health Emergency and Disaster Nursing, the official journal of the Disaster Nursing Global Leader Degree Program.