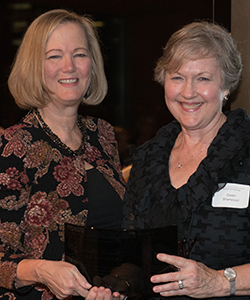 Dr. Sherwood is a professor and associate dean for Academic Affairs at the University of North Carolina at Chapel Hill School of Nursing. Her career has focused on advancing quality and access to nursing education locally and globally, particularly in developing regions’ programs.

During 28 years at the University of Texas-Houston School of Nursing, she led the faculty practice enterprise, held a joint appointment at The Methodist Hospital as founding co-director of the Center for Professional Excellence and was nursing principal investigator on two AHRQ Center for Patient Safety grants with the Medical School.

For 15 years she directed outreach education in the Lower Rio Grande Valley. During her time in Texas, with more than $2.9 million from combined line-item state funding and the Health Resources and Services Administration grants, Dr. Sherwood directed the first satellite distance education network with weekly broadcasts, and a cooperative outreach MSN with Pan American University, the first graduate program in the area.

In 1993 she helped develop the first MSN program for China and led Baccalaureate Curriculum Reform that fueled a nursing paradigm shift across China. Since 2012, Dr. Sherwood has led an annual three-week reflective practice seminar sponsored by the Thai Ministry of Public Health.

In addition to her international impact on nursing education, Dr. Sherwood has been a primary influence in transforming nursing education and practice in the U.S. as co-investigator/co-principal investigator for the ground-breaking Quality and Safety Education for Nurses, which was funded with $4.2 million from the Robert Wood Johnson Foundation.

Dr. Sherwood is a founding faculty member for the Academy for Emerging Leaders in Patient Safety for nursing and medical students funded by The Doctor’s Company Foundation and MedStar Health, past president of the International Association for Human Caring and vice president of Sigma Theta Tau International Honor Society of Nursing, and a fellow in the American Academy of Nursing and the NLN Academy of Nurse Educators.